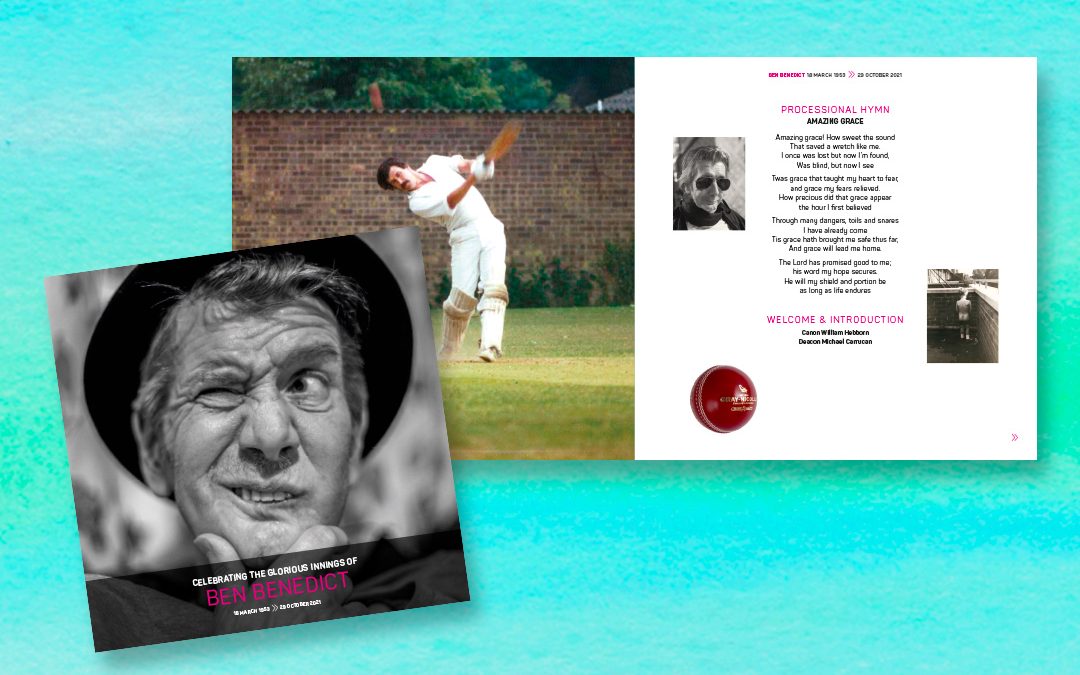 Funerals are never easy occasions to attend or to organise. In Loving Memory were asked to design and produce a bespoke, beautiful Order of Service Funeral Booklet to represent the recently deceased and encourage a range of emotions from the reader – to smile, laugh, cry and create interesting talking points about their life.

The last few years during the covid pandemic, have been very difficult for all of us but when we lose someone close to us, not being able to say our goodbyes increased the pain and heartache. As the restrictions were lifted, Ben’s family and friends were able to celebrate his amazing innings and give him the applause he deserved.

Ben was a larger than life character who loved his cricket. In his younger days he played to a high standard and when he finally hung up his pads he became a member of the MCC and followed the England cricket team around the world when they toured. Not only was he a massive cricket fan but he part owned a number of race horses and often went to the races to watch them in action. Sport played a huge part in Ben’s life but nothing came before his family, particularly his grandchildren. Ben was the soul of any party, the centre of attention and he truly lived life to the full.

Trying to get across the real essence of what Ben was all about was a tall order, but In Loving Memory used an unusual portrait of Ben for the front cover which epitomizes this quirky, fun and eccentric character. It worked perfectly – this was Ben. The full order of service was positioned throughout the booklet interspersed with photographs of Ben’s life, from childhood through to his final memories including his love of cricket, horse racing and his family.

Ben’s interesting past and his zest for life gave the final booklet a true reflection of his amazing life and resulted in a memento that released every emotion possible. This truly was Ben’s greatest innings and a treasured remembrance of his life.